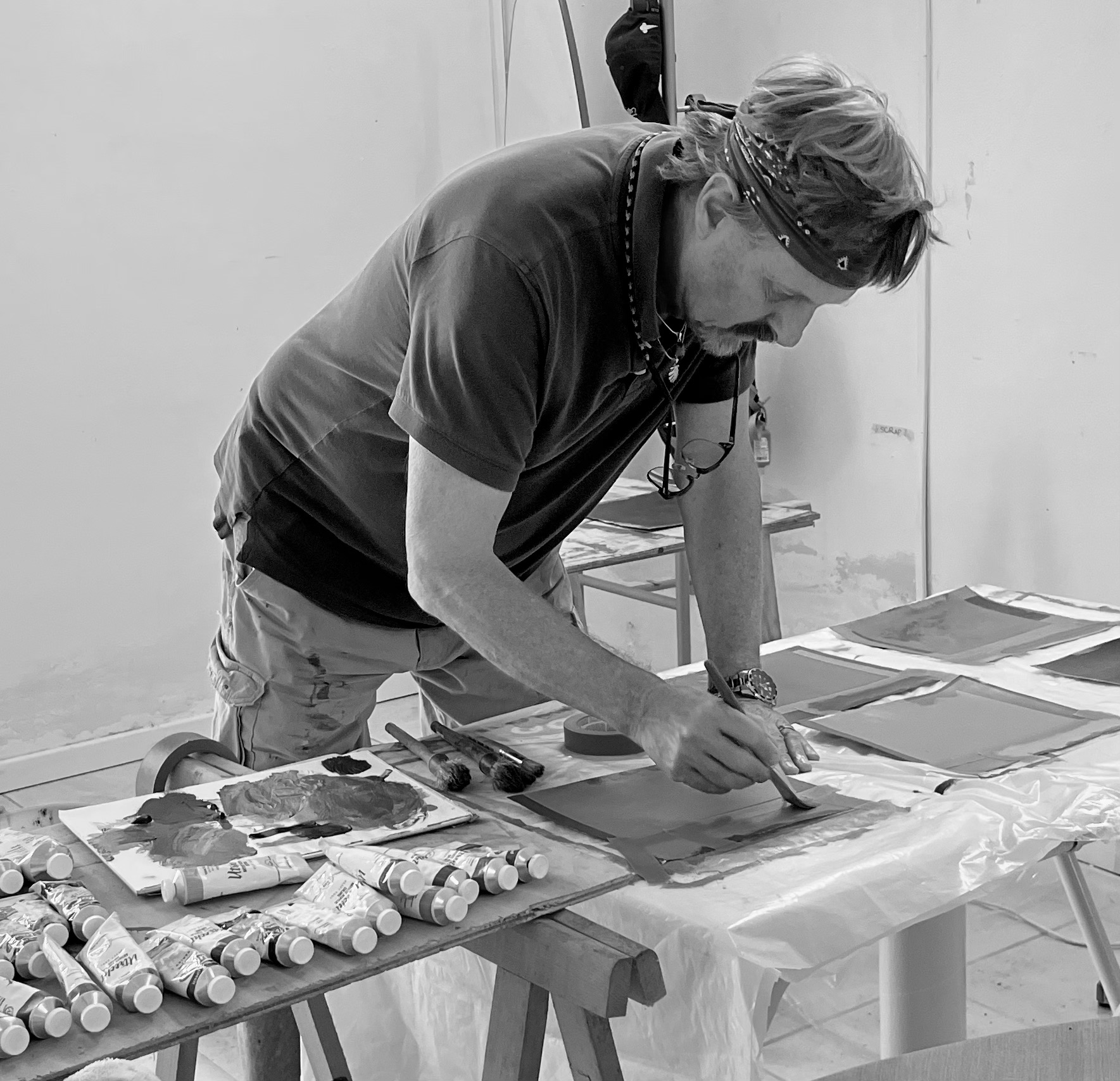 My work is an assemblage observations, influences, and ideas- whether it is painting or sculpture. For the past forty years, I have had to contend with the bifurcation between the two. I see no difference between them since they are derived from the same sources. The work simply becomes a brief record of action, improvisation, intent, combined with the constant impulse to build or construct in two or three-dimensional space.

As I create, I try not to concern myself with what the artwork is. My concerns extend to its context, the time and space in which it exists, and how it will be created through a process of trial and error which leads to evolution rather than finality.

Originally from Cincinnati, Ohio, James Jared Taylor has been living and working in Southern California since 1988.  For most of his career, he has been both a practicing artist and educator.  His artwork is represented in several galleries and is included in various public, private, and corporate collections.   He has won various awards including a New Jersey State Arts Council Individual Fellowship and several jury awards.

Although primarily trained as a sculptor, Taylor has created artwork in several media, which include bronze casting, painting, and printmaking.  He has had numerous solo and group exhibitions throughout the United States.  His work is in collections worldwide.

Currently, Taylor is developing a series of abstract paintings, “Improvistory Notations,” that stem from his earlier work, “The Meseta Sequence.”  They are incorporating elements of architecture based off drawings and observations.  His sculpture is rooted in his experiences in foundry and metal fabrication.  The current sculptures, “Reified Reconstructions,” “Orbits,” and “Constellations” are geometric and neo-constructivist in nature that use wood, steel, and bronze with various patinas and paint to incorporate color.

Taylor was an art educator for thirty-two years in California.  He was an adjunct professor of art education at California State University-San Bernardino.  He taught sculpture and art history at the College of the Desert.  In 1999, he was the founding art department chair at Desert Hot Springs High School.  He was also the recipient of a Bravo Award in 2004 for Excellence in Art Teaching.  In 1994, he also received an Anderson Children’s Foundation Grant to establish a printmaking program at Mt. San Jacinto Continuation High School, an alternative high school in Palm Spring Unified School District.  The printmaking program was also part of an Exemplary Program Award from the California Continuation Education Association, which he and the school received in 1998.  In 2003, he was nominated by his students to be listed in “Who’s Who in American Teaching.”  He taught both two and three dimensional arts, Advanced Placement Art History, and Advanced Placement Studio Art at Chaparral High School in Temecula, California. In 2004, Taylor was a member of the Scoring Evaluation Team for the California Subject Examination Test (CSET) under the California Department of Education.  He served on the Visual and Performing Arts Master Plan task force for Temecula Unified School District.  He served as Academic Dean of the  Visual and Performing Arts Department at Chaparral High School.  Taylor has also done work with the California Arts Project implementing content standards and formulating assessments, including a student created sculpture installation as part a project for the California County Superintendents Educational Services Association (CCSESA).  In 2017, he was a member of the focus group for the revision of the Visual and Performing Arts Content Standards for the California Department of Education.  Taylor retired from teaching in June 2020.

Mr. Taylor’s other interests include music and the outdoors.  For many years, he has practiced guitar, particularly jazz, and he has played in various big bands and smaller jazz groups.  Taylor studied classical guitar at the Musical Arts Center in Cincinnati (1979) and he studied jazz guitar with Joe Diorio (2000-2001) and Doug MacDonald (2012-2022). He has played with the The Robert Holts Orchestra, The Tim Miller Quartet, The Valley Winds Swing Band, The Ted Herman Orchestra, The Red Apple Orchestra, The Second Hand Jazz Band, the United Swing Band, along with his own groups.  He attended the Stanford Jazz Workshop in 2004 and 2005.  When he is not in the studio or playing music, Mr. Taylor and his wife, Brooke, enjoy hiking, surfing, yoga, and skiing.  During the summer of 2012, he walked the entire 804 kilometer (500 mile) French Route of the Camino De Santiago in Northern Spain.  Taylor and his wife reside in Desert Hot Springs, California.

“Squares, circles, and lines overlay in rich, muted colors, filled with atmosphere.  There is a sense of volume in Mr. Taylor’s work that gives them enormous scale.  Even the small paintings seem massive.”

“He is a meditative artist who communicates with idealized, abstracted forms.  His geometric abstractions read like graphic parables.  Although Taylor’s work contains a lyrical quality, it avoids illustration.  It seem to develop its according to the logic of architectural design.”